I know, Uncle Dave wishes he could have been here

Being a plumber and all he’s dying to have been here. But, alas, he was stuck in NY on call for the entire holiday week. He was able to offer excellent advice via the internet though and that certainly counts!!!
So we turned the plumber away this afternoon. I went over to let Johnny know that we’d take him up on his offer to help. I called Chris home from his Mom’s bday party to get started. Johnny came over to look things over, take some measurements, and draw a picture. Next he and Chris drove off into the pre sunset to HD for supplies, but not before Johnny gave Sarah and I explicit instructions on what he’d like done before he got back. We were to disconnect the shit pipe at the ceiling in the kitchen and at the ceiling in the basement, and shatter everything that ran down the length of the kitchen wall with hammers. Sounds simple, right? Wrong. First of all, the pipe is made of cast iron and is heavier than a motherfucker (pardon me). Second of all, it has two 45 degree turns and a 90 degree twist in the basement which, when hit with a hammer, exploded shit all over me (yes, face, hair, clothes, legs, arms, etc.). But we were troopers, and by the time that the boys returned, the shit pipe was removed, all surfaces were sprayed with bleach, contaminated pieces were in the dumpster, and we had been hosed off in the back yard (at least for a start). 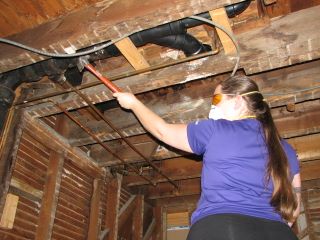 Next, Mom and Yoda came over. They, having not checked my blog all day, had no idea that any of this had taken place. However, they jumped right in. Yoda began measuring the rough opening for the front door that Ger and Sarah had created and found that we would have to rebuild some stuff before installing the new door. He made a shopping list for HD for us too. While we ran to the store, Mom neatened up the house, tools and all, and got the grill going and broke out the meat for dinner.
Between the hours of 3:00 and 7:00 we laid 8 plus feet of pipe and secured it, cleared a rough opening for a new door, installed a replacement window, put up insulation on exterior walls, and ate dinner. We grilled some hot dogs, hamburgers, kielbasa, chicken sausages of every variety, baked beans, and all kinds of chips.
After dinner, the guys started cutting lumber that we had picked up and framed out the rough opening for the door. Next they installed it, fricking perfectly. Chris is downstairs now putting on the knob and deadbolt so that we can sleep without worry (it takes a key from the inside and the out). The lumber is all in the kitchen so as to not get wet overnight. 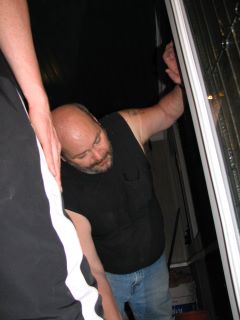 What tops the cake is this: at 9:47 the phone rings and it’s the plumber from earlier this afternoon. He has left his expensive flashlight behind and would like to come pick it up in 15-20 minutes as he has another call to go to immediately. He comes to the door and we have the light in the middle of the kitchen. As I grab it, he gravitates straight toward the new plumbing “Who do this?” he says and I reply, “We did. I called in the family.” All he could say was “Good job”, and Sarah and I ran next door to let Johnny know.
I cannot give enough thanks to the friends and family who have helpd us over the last days, and who will in the days to come. We went from a $1595.00 job to spending $94+ on parts, $0 for labor for a plumbing job that could have set our entire project behind by two days, at least. We also have a door that has been beautifully installed. Our exterior-facing walls are now insulated. I am still in shock! I love you all!!!

Happy Anniversary to Shaun and Sue

Ok, back to food