What this soup lacks in color it makes up for in flavor.  The parsnip has that earthy mouthfeel that carrots carry in their scent, but doesn’t come through in their taste.  The onions round out the flavor, and the maple sweetens the dish.
If you own a food processor with a slicing attachment, break it out for this recipe.  Cutting the onions and parsnips to the same width will significantly cut down on your cooking time. 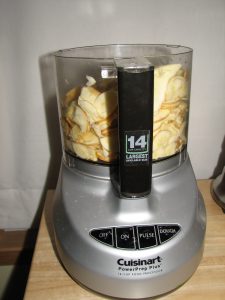 I’ll also add this note (at the beginning of the recipe instead of the end for folks like me who work from the top down and don’t read the recipe ahead): shake your can of evaporated milk well.  And I mean well!  If you don’t, you’ll pour some watery ick into your soup and find the thickened sludge which are the solids that should be in your soup in the bottom of the can.
Ingredients
1 Tablespoon butter
1 Tablespoon olive oil
2 pounds parsnips , chopped
2 medium onions, chopped
2 cloves garlic, minced
6 cups chicken or vegetable broth
½ cup evaporated skim milk
1/3 cup maple syrup
Directions 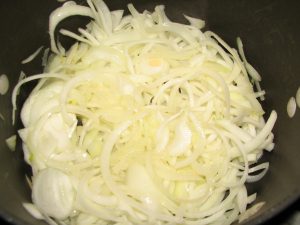 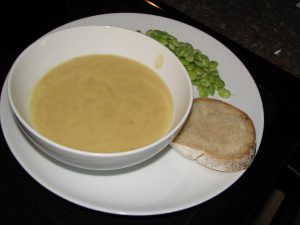 Because the soup is a little lacking in protein, we opted to have ours with a side of Lima beans which are also great for: lowering cholesterol, having a fabulous fiber content, are packed with nearly 25% of your daily iron needs, et cetera.
J